he staff at the Eastern Iowa Arts Academy had a conversation last fall about how grateful we are for all of the wonderful teachers and volunteers who give of their time and talents. We decided to create an award to be given to an individual who demonstrates extraordinary commitment and dedication to our vision of igniting passion and building community through the exploration of the visual and performing arts. The recipient of this first annual award, and the person we named the award after, was George Madlon. Not only is George an exceptional teacher, he has grown as an individual through his association with the academy, believing in himself and dedicating himself to his art.  He is an inspiration to so many of our adult and young students.

I had the pleasure of observing him in action when he paid a visit to Roosevelt Middle School as a guest artist.  He visited two classrooms who had been using math concepts to design a stained-glass project.  He began nervously, giving a brief but thorough history, and soon had the students giving him their full attention.  If you have visited a middle school classroom recently, you know that this alone is a big task.  He brought samples of his work which he passed to the students, then he had them practice cutting glass and foiling glass - two skills needed to execute their designs.  Students were enthralled as George patiently encouraged them.  George’s wife, Barb was also there in the classroom.  She is a vital part of his success.  She regularly works alongside of George to organize class details and support his success.  She was helping students apply the foil, ever patient and kind.

The exciting thing for me, since I visit so many classes each year, was to see the level of engagement and excitement from the students.  They were crowded around the demonstrations, waiting for their turn, admiring his artwork and wondering how they could do more.  I know one of the things that was most touching for George was when one shy student asked if she could take a picture with him.  He gladly granted permission and then many more students piled on to get photos with him.

George not only charms the younger students, but his adult classes consistently sell out, too.  He is so encouraging and kind and is truly an inspiring teacher.  And if that weren’t enough, in the past two years after EIAA received two generous donations of stained glass and tools of the trade, George has come in to help organize these mountainous supplies -  a heroic effort indeed!  If he can help out with anything he is willing, driving students on a field trip, and running an errand or two for us.  The George Madlon Award is well named and forever dedicated to this outstanding individual.  Congratulations George!  We love you, and thanks for EVERYTHING! 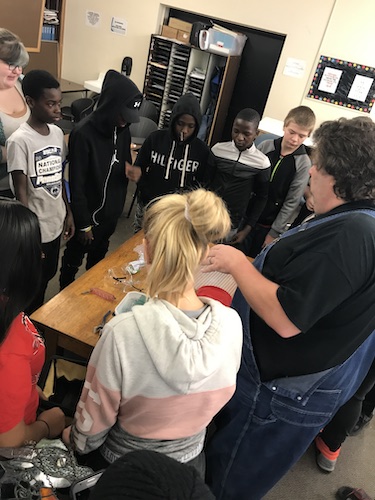